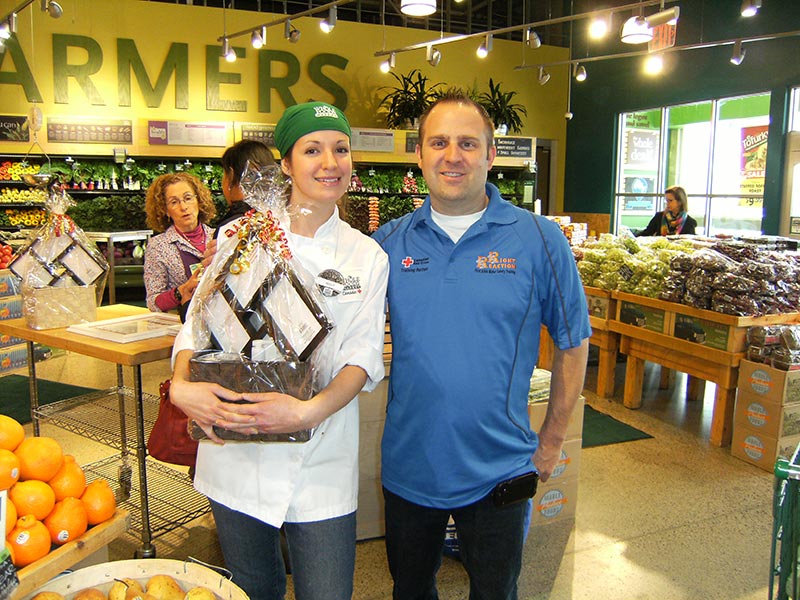 The quick thinking team saved the life of co-worker Kelly Goddard by working together to apply their first aid training. When Kelly collapsed at work and suffered cardiac arrest, they called 9-1-1 quickly and used CPR to keep her alive till the paramedics took over. They were able to save Kelly’s life with their action!

Read the story in the Mississauga news…

Read the story at Mississauga.com

Article published in The Mississauga News & online at www.mississauga.com.

MISSISSAUGA – Unlike most teachers, Brad Whalen hopes his students never have to use the skills he imparts to them.

In a life and death situation however, Whalen, a first aid and water safety instructor, said he would want the trainees to do what a quick-thinking group of employees from Whole Foods in Mississauga did last summer-save a colleague’s life.

Last July, store employee Kelly Goddard was working in the bakery when she collapsed in one of the coolers. Her colleagues sprung into action. Two took turns giving Goddard the CPR, while the others helped carry her out of the cooler and called 9-1-1.

On Friday, April 25, the Canadian Red Cross feted five employees- Lisa Slater, Dario Brenes, Mary Frewen, Chris Goodfellow and Tim Everett-at a special ceremony held at the store and awarded them each with the Rescuer Award.

Slater, a store team leader, said she was in her offices when she heard a page that alerted her to the fact that something was not right. She rushed out of the offices. When Slater reached the bakery, she found Goddard in the refrigerator out cold.

“She was blue,” Slater recalled. “We moved her and I started doing CPR. We could see the colour coming back on her face and when stopped, she would turn blue again. So, I kept doing the CPR. After some time, Dario took over. The paramedics arrived soon after but it seemed like eternity. It was truly a team effort because everybody pitched in and knew what to do.”

The Red Cross Rescuer Award recognizes the efforts of individuals and off-duty first responders who go out of their way to save a life. Success in the rescue is not mandatory, but in the case of the situation that unfolded in Whole Foods Mississauga location, it all ended well. As it happens, the employees who assisted Goddard had previously completed the first aid training with Whalen.

“I am blown away,” said Whalen, owner of first aid training service Right Reaction and a training partner with the Canadian Red Cross. “This is exactly what we hope people would do. We provide the training and when they save someone’s life, it’s unbelievable.”

A grateful Goddard was on hand when her rescue heroes received the plaque. Three months after the incident, the Mississauga resident was back to work and was then herself trained in CPR.

Although she blacked out and doesn’t remember anything about the incident, she said she’s aware how the actions of her co-workers saved her. “When I woke up, I saw the paramedics, police and my team members around me,” Goddard said, adding she’s still undergoing additional tests that would allow doctors to determine why she had a cardiac arrest. “I am so grateful. There are no words to say what I feel. This also made me realize; you never know when you may have to use the CPR training and it’s important for people to retrain.”

Red Cross Canada trains some 6,500 Canadians each month on first aid and CPR training. The course is offered to individuals and for employees in workplaces and is delivered by certified instructors who can tailor the course to suit the needs of the participants.

Recent Posts
Archives
Comments? Feedback? Questions? Get in touch with us to book a course. Remember, we’re here to help!
Get In Touch
Copyright Right Reaction
All Rights Reserved.
Policies  |  Forms
Back To Top
Search